How Build In Public Mastery gave me ultra-clear direction 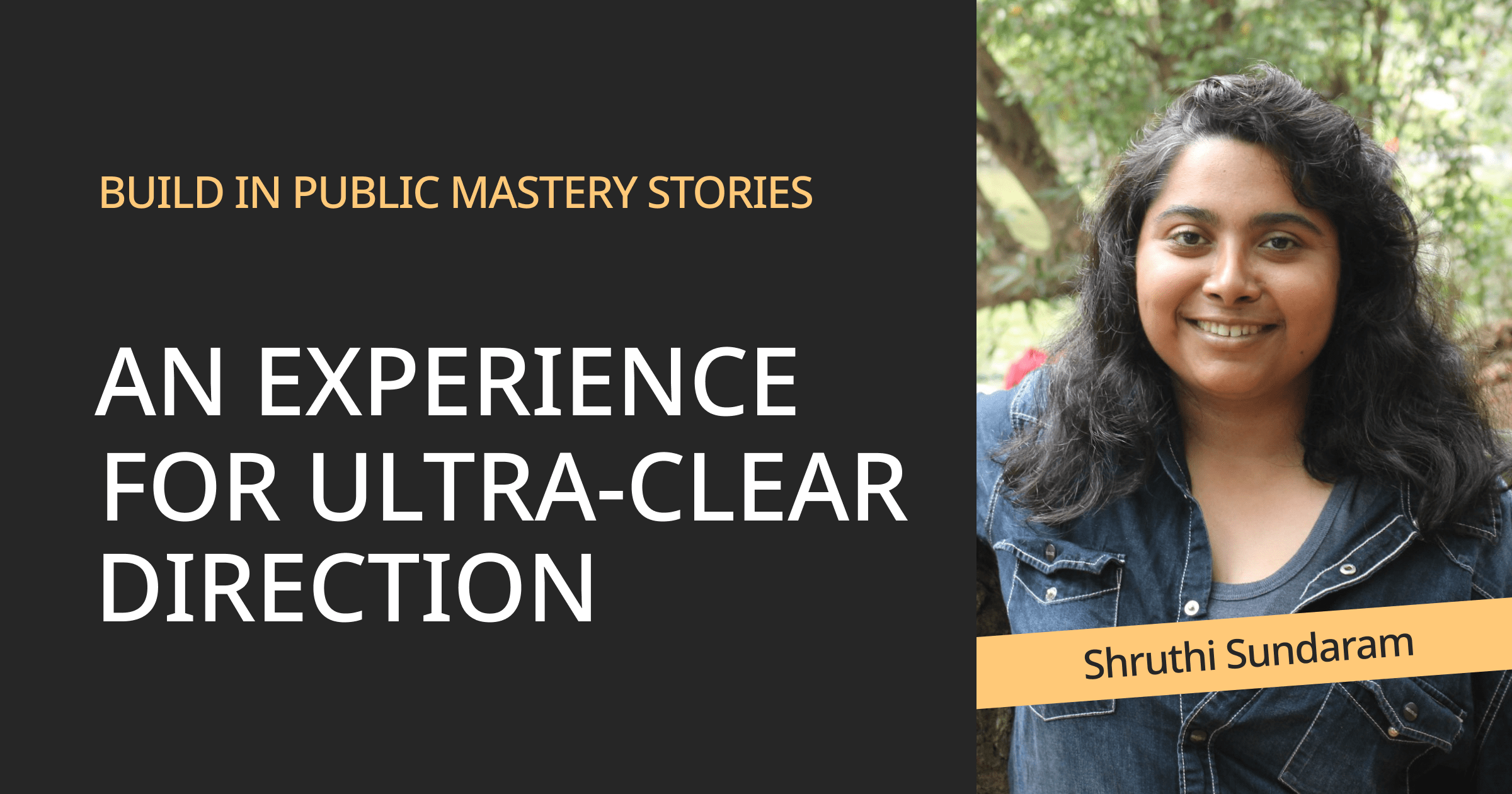 Go to: Build in Public Mastery

This is written by Shruthi Sundaram (@Shruthi_O3)

If you had asked the Shruthi two months back where she saw herself in the next six months, I’m sure you would have received a blank face.

Unsure and confused are some of the words that can describe me then.

As a first-time solopreneur who had just left her job a couple of months back and was finding her footing in the world of online businesses, I guess that was normal. Especially since entrepreneurship is not something that’s celebrated until ‘overnight success’ occurs where I come from (India).

Coming from a family of workers, I was never exposed to the concept of working for yourself. No one spoke about the challenges, and I had no mentor who held my hand and led me down a defined path.

And the traditional ways did not work for me. I’m an emotional person who loves to show my vulnerability and failure in a world where strength, success, and aggressiveness are celebrated.

I felt un-belonged and weird.

Over time, separating the dark swamps from the lotus petals that bloomed in them also became hard. (I’m personally proud of this analogy)

The most challenging decision was whether to focus on revenue or build credibility. As though they were on the opposite ends of a see-saw. Of course, even if I did choose one of them, I had no ‘f*cking clue’ of how to proceed.

All I had was ONE idea I was passionate about.

That’s how I came across Kevon Cheung, the Build In Public pro, on Twitter. The guy immediately caught my attention because it was refreshing to see someone not spamming sales messages every time I blinked.

He was someone who was ultra-genuine and made me believe that I wasn’t the only weird one who saw things differently.

So then, in a non-creepy way, I started drinking up all his blog posts, stories, and videos…learning exponentially about Twitter, business, and storytelling along the way. I also jumped on a call with him a few days later (because duh) and had a fantastic discussion about creators today.

He had earned a super fan.

Now you might be asking, “Shruthi, wasn’t this post about his course? Why are you droning on about Kevon?”.

Well, that’s because I genuinely believe the teacher is the most important in the learning equation. Not books. Not the medium. If you have the wrong mentor, everything can get fucked up.

And Kevon was a fantastic-amazing-terrific (add all the good adjectives) mentor.

Who was there with us, hand-holding, giving feedback, sparking friendships, focusing on the quality…everything a transformational course should have.

That guy lived, breathed, talked, and slept BIPM for those three weeks. And god knows how many before.

Now that I’ve praised him enough (Kevon, if you’re reading this, don’t feel shy. YOU ARE THAT GOOD), can we get to how the course was the best one I’ve taken in the past two years?

Now, Build in Public Mastery (BIPM) was life-changing for me in a way I never expected.

1. The course material, workshops, and 1:1 session

I’m not kidding. Those three weeks were intense.

We had assignments, minimum of 2 or 3 workshops a week that was 1.5 hours long, had to finish a project in those 21 days, engage with fellow members and go through the course materials.

The personal session with Kevon was transformational for me. As an impulsive person, who dives head first into anything without thinking twice, Kevon helped me lay out a clear road map ahead, which I can refer to from time to time.

Only after listening to it two weeks later I learned how much the session helped me.

He’s an excellent and empathetic listener, capable of seeing the big picture and giving a different perspective, which was so helpful for me in the early stages of my journey.

And while I did not relate to all aspects of the book, I was blown away by his SB7 framework.

A must-read for any story seller out there. Here are the 7 principles below: pic.twitter.com/dPdaM526yD

2. The friends and community I formed

The one point I could give 100/10 marks to Kevon? It is bringing the right people together.

We were a group of 17–18 folks, all aspiring entrepreneurs who focused on a genuine mindset. Every call and workshop was filled with inside jokes(we were terrified Kevon would chuck us out because we kept spamming the zoom messages at a point), laughter, pulling each other’s legs, and whatnot.

Finally, I found a group where I felt I belonged.

Sometimes fellow cohort members become more than that. They become friends, who support each other, give feedback and keep encouraging each other.

Yesterday, I had my first FRIENDS call with the #BuildInPublicMastery community!

Thank you so much for joining! You made my day!

Where the whole room lit up with each other’s positive energy, everyone was so supportive throughout, taking extra effort in engaging, jumping when someone needed help without thinking twice, and being there for each other, not because we had to, but because we loved and respected each other. There was a point when we started meeting on our own, exchanged numbers with some, and became a family in 3 weeks.

You know the feeling when you instantly connect with a person for no reason?

Yeah. That happened to me with at least half the people in the cohort.

Entrepreneurship is a lonely journey without friends. And Kevon’s cohort gave me some fantabulous friends. For which we’ll always be grateful.

As a group, we’re still going strong. Planning workshops, creating a group and coming together once in 2 weeks. This is apart from supporting each other via engaging on Twitter.

Ask anyone in the BIPM cohort about what was the best part? The first answer will be the community.

Thank you for bringing us together, Kevon.

As a serial course taker, I’ve been a part of several free and paid courses over the past two years.

While some disappointed me, some I didn’t even bother finishing or attending.

But BIPM was different. It was special. It was transformational in so many different and unexplainable ways—something only people who have gone through the experience can understand.

Most importantly, it also taught me how to run a cohort (if I do it in the future). Because it was that ggggooooddd!

After the cohort, here were 2 of the things I achieved:

I grew confidence in promoting my newsletter publicly.

Yesterday 304 solopreneurs got an info-packed email on:

How to use humour in online conversations (+ 5 fantastic resources to dig deeper).

Want to get it? Here you go! pic.twitter.com/GEwwYwKLN3

I launched my first product, a DM toolkit, and made my first Internet dollar.

My target was $500 with the product as an experiment. 2/5th of the journey accomplished!

Thank you to everyone who has supported me wholeheartedly in this journey! pic.twitter.com/ZkX3Tbs2aB

I cannot be more grateful for the day I came across Kevon’s profile. Thank you.

Are you interested in growing your business in public and organically marketing your work?

Build In Public Mastery is the right course for you! Sign up for the upcoming cohort here:)