From university drop out to confidently building in public 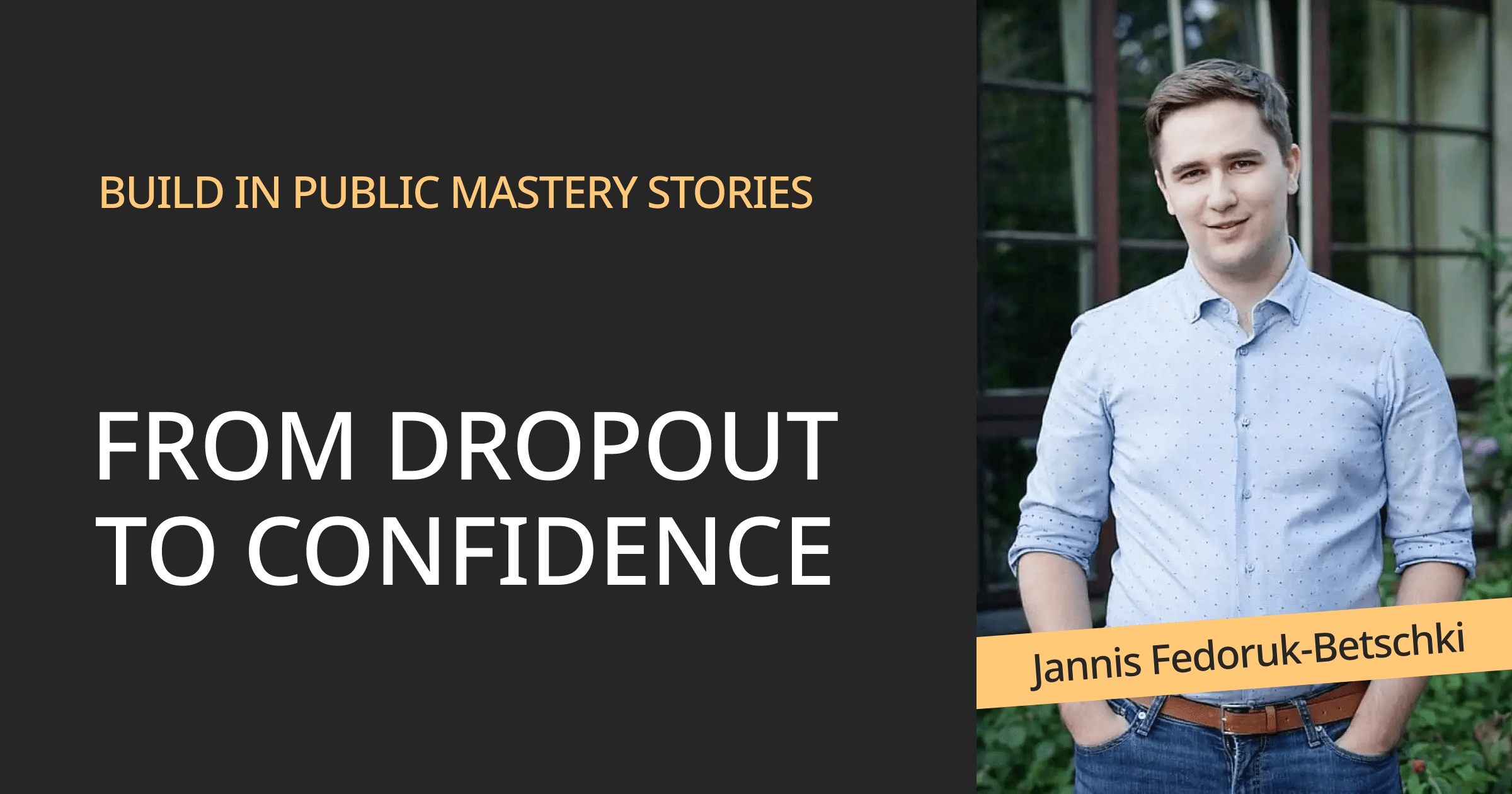 Go to: Build in Public Mastery

In late May 2022, I received a notification on Twitter: “Kevon sent a message”. I’ve talked to Kevon several times before. But I had no idea that this would be the start of such a transformative few weeks.

But let’s take a step back – who am I, and why am I telling you about this?

My name is Jannis and if you look at my CV, you’d probably think “Oh well, another university dropout”. I’ve always had issues with theoretical knowledge, because of the way I learn. I learn by doing – not by reading books or listening to lectures.

After many failed attempts of launching my self-employment, I made a commitment to myself in 2022: This time, I am in it for the long run.

The easiest way to get traction seemed to be Twitter. No need for fancy pictures or videos. Just put your ideas out.

I call my first month on Twitter the spaghetti strategy: "Throw spaghetti against the wall. Some of it has to stick". I mean, look at the kind of tweets I sent back then:

I just tried to copy big accounts, completely ignoring the fact that I had absolutely no credibility. I treated Twitter as a journal – and not like a tool to build a business.

Now, after the Build in Public Mastery course, my presence on Twitter is focused. I have a plan. Not every tweet goes through the roof – but that's not what I am aiming for anymore.

Here is how the Build in Public Mastery cohort has helped me become a more confident creator.

I got clarity on my goals

During our first live call, Kevon asked us a simple question: “What is your goal on Twitter?”

It was the first time I thought about it. I instinctively wanted to say something wholesome. Something that would show I am a good person. But the environment Kevon set up made me take a step back. This wasn’t about showing how wholesome I am. This was about improving how I build in public.

So, I answered, “To build a business and make money”. Too straightforward? Maybe. But I still stand by this.

I stepped out of lurker-mode because I want to build a business that helps me live the life I want. Why should I hide that? Building a business is nothing to be ashamed of.

In the following calls, I managed to shape this idea further and further. Being in a live call with 10+ other people made all the difference.

I think we are all familiar with imposter syndrome. For me, it has been a constant companion for the last couple of years. It probably stemmed from the fact that I left university and learned most skills on my own, without the validation of a degree.

I realize that I always thought I wasn’t good enough. That was the #1 reason I built most things in private. And there were a ton of things I built. To name a few: 2 different web design businesses, a drop-shipping store, different SaaS ideas, ...

During the Build in Public Mastery course, I met amazing people. I started a new project, Tools for Creators, and got constant feedback publicly.

With @useOwlery I wanted to start working on my bigger goal: helping non-tech creators jump the tech hurdles.

Most surprisingly, people were impressed with my skills and the ability to code and iterate quickly.

It wasn’t BIPM that made me a better programmer and builder – I’ve been a decent one for the last couple of months, I assume. But BIPM and the people behind it revealed that to me.

Imposter syndrome still creeps up on me every other day. But now I have a support group that openly tells me their opinion – good or bad. And this helps me a lot with keeping my imposter syndrome in check.

Right after the cohort was over, I launched Tools for Creators while being both excited and scared.

Again, the community's reaction blew my mind. All because I was consistently building in public for a few weeks.

I found my tribe

Speaking about support groups – I expected that the Build in Public Mastery course would connect me to some awesome people. But I would have never guessed that they grew into a circle of true friends so quickly.

I even invited my cat to join us!

I already introduced the #BuildInPublicMastery cohort to her, so it's only fair that the rest of the bird app also gets to know her:

This is Sissi. One of the two cats that regularly occupy my laptop.

If you receive weird messages with random letters - it's probably her 🙈🤣 pic.twitter.com/aBhgUXIo7H

Lastly, I wrote a small recap on Twitter that covered more:

Me before #BuildInPublicMastery: OMG SCREENSHOTS!!!!

Me after BIPM: Screenshots - but let's also get feedback. And show some personality. And just be myself.

Taking part in @MeetKevon's cohort really changed the way I use Twitter.

Overall, the BIPM cohort was a lot of fun for 3 weeks! We've developed friendships, spent countless hours talking to each other, and laughing so hard our bellies hurt.

This has been the biggest educational purchase I have done so far and I haven't regretted it.

I documented my 21-day challenge in this thread to remember how much I've grown.

Build in Public Mastery is for you if you also want to build relationships and a business on Twitter & are open to leave your limiting beliefs behind.