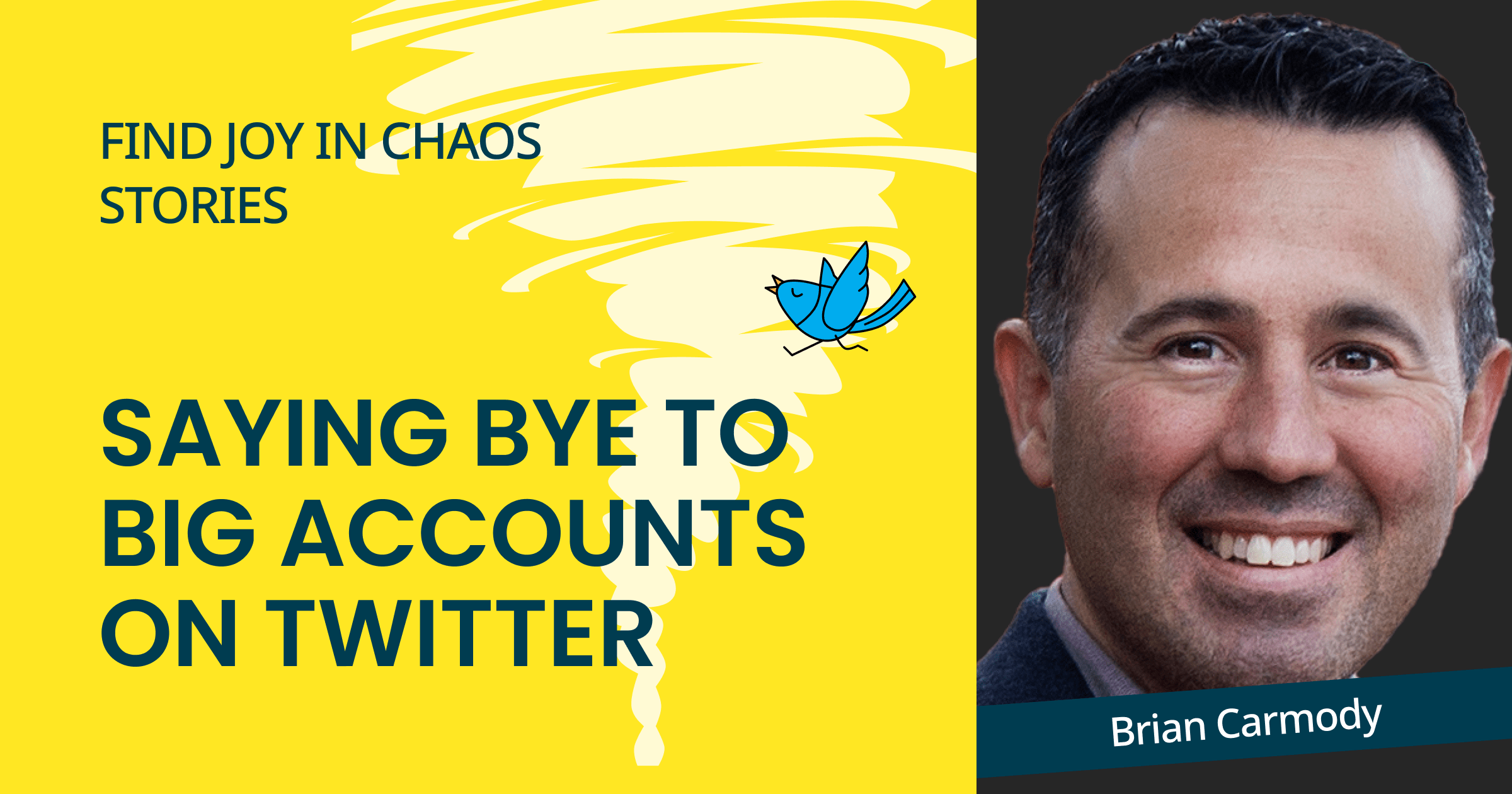 Go to: Find Joy in Chaos

4 days after Kevon launched Find Joy in Chaos, Brian put this out on Twitter:

Authenticity and wisdom without the tone of someone who overconfidently hijacked a tall soapbox and a loud mega phone.

He makes you want to call him ‘friend.’ https://t.co/ooOim1Rbcj

And so I couldn’t help but reach out to Brian Carmody (@BrianCarmody) because I was curious to find out about his experience with Kevon’s book. This post is my effort to share Brian’s story on his plan to use Twitter to build his community.

Brian has been side-hustling since 2011 and, as of today, he is running 6 businesses!

He has written two books about his process to transform your business from being a commodity to an authority. A lot of his friends have great jobs but also want to start businesses, and they asked him to create a course to help them execute their ideas.

But after Brian talked to his friends, he saw that their problems are not the lack of resources. There are plenty of guides out there to kickstart businesses. What he saw was more intrinsic - they lacked accountability to get the needle moving!

He knew there are so many more entrepreneurs who would find value in an accountability community and so he wanted to use Twitter to attract and groom his new idea —Side Hustle City—to help people execute.

Brian pretty much followed the common pattern of everyone who shows up on Twitter to build a business:

So he was looking for a guide to help him with Twitter. He found so many Twitter playbooks that emphasized “quickly”, “secrets”, and “1 million followers in 6 months”. Deep down, he knew that these were just copywriting tricks to get people to buy.

Then one day, Brian saw this tweet from a friend mentioning Kevon. He said he clicked on the profile and felt relieved that finally, someone was busting out these myths about growing on Twitter.

He called Kevon “a regular guy talking about making friends”.

When he saw that Kevon had written a book on Twitter growth, he instantly bought it on launch day because he knew the book would be his guide.

How the book helped Brian

Brian knew how to build a business and run it. However, he did not know how to use Twitter to build a personal brand and a community that cares.

He said Find Joy is Chaos was all the help he needed. And, of course, I asked him about the biggest takeaways he had from the book.

Brian followed a lot of big accounts with more than 50,000 followers but soon he realized that these people were:

And he also saw that a lot of people replying to these big accounts were only trying to get their attention. The replies weren’t about making conversations at all.

Believe me, I've earned it. I commuted into Boston for 20 years...3 hours round trip everyday.

That commute motivated me to find a better way and take more control over my life through building my own (home-based) businesses.

After reading Find Joy in Chaos, he made sense of his observations. He stopped following and engaging with big accounts, and instead, he now focuses on talking to the people who he can help or who can help him.

Being his true self

Brian saw a lot of people imitating the big accounts and selling templates. He felt so compelled to do the same because he thought this was the only way to grow a business on Twitter.

I found Kevon’s book a refreshing change to the “Twitter template gurus”. (You may or may not have seen them yet.)

Kevon’s book reminds us that we can bring our real human self in all its dimensions to Twitter.

However, throughout reading Find Joy in Chaos, Kevon was telling him that he can be himself and he does not have to mimic. This gave him the confidence that many people have built up their brand and voices being themselves.

Now he is bringing his bold, kind, and humorous real-life voice to this online space.

Finally, he knows who he should connect with

Twitter can feel like a wild jungle at first, and Brian struggled to understand who his audience should be.

After reading Find Joy in Chaos, he now has clarity over the exact group of people he should talk to:

Instead of seeing an auditorium of people in front of him, it feels like he has these filter goggles on to highlight these 3 groups of people precisely.

This is what engagement is about

In the past, Brian would not know how to reply to people’s tweets so he rephrased the idea and hoped that reply could get him some attention.

Now he chooses to only jump into conversations when he wants to build a relationship. He then kicks off a meaningful conversation to add value to people’s lives.

Ayush, I love this post/thread. You wrote your story very well.

It was an effective way for me to get to know you better too.

I feel like I know a bit about how you think, what matters to you, and what your goals are. (At least a hint of them.)

This makes him less stressed about Twitter because he no longer has to reply in large quantities. And the relationships have created so many more opportunities.

The science of helping and lifting people

So here's a behind-the-scenes peak at my dashboard in Prelaunch.

ICYMI:
Yesterday I launched an offering. It's a 60% discount for life on my new community, Side Hustle City.

Prelaunch is an idea validation marketplace that allows me to test interest before I invest too much. pic.twitter.com/a7Iq1YJuaT

Now, Brian goes out of his way to help people. He is active on Twitter building his community to help business owners, but he is also there to help if anyone needs anything.

Find Joy in Chaos opened his eyes to the idea that when he prioritized helping other people, the goodwill and relationships will eventually flow back to his work and business. It wasn’t obvious before, but it is now.

Brian is now also practicing the Build in Public framework Kevon advocates for. He wants to use his work and progress to attract like-minded people to connect with him. He is still early in the journey on this!

Near the end of our chat, Brian said he has never had so much fun on Twitter. It was the connecting and helping that make him feel good.

He said that his most significant win after reading the book was the improved quality of his network.

He wrapped up our call by saying “Twitter should partner up with Kevon and distribute Find Joy in Chaos to anyone who shows up on Twitter to build a business or a personal brand!”

Well, that was encouraging to hear!

For now, I just hope that more people can find joy and achieve their wins using our favorite social media platform - Twitter.

If you enjoy this story, check out Find Joy in Chaos on Amazon, Goodreads, or Gumroad. You can also befriend Brian or Kevon!